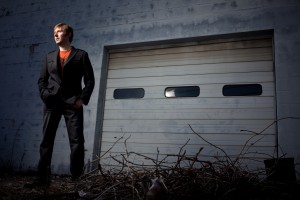 To Wright, being a Christian means following Christ’s example of unconditional love, a theme that is explored in his music. “If we all did this, the world really would be a different place. Most people feel isolated in our society, so we write songs of hope that introduce them to a fulfilling relationship with God.”

In describing his musical background, Wright says, “Growing up, there was always music in our home. My mom was a singer. When she was in college, she auditioned and was selected from hundreds of others to headline a band for a summer television show based in Charlotte, North Carolina. She has one of the best voices I’ve heard. My dad was self-taught on the piano and played the bassoon, my brother was in a band, and my sister and I sang together for many years. So it was natural that music became a way for me to express my faith.”

Church was also an important part of Wright’s life growing up in Asheville. “We were members of a large church in Asheville for many years, and then started attending a smaller church in Swannanoa, North Carolina. The pastor and members of this church gave my sister and me so many opportunities to grow and develop our music ministry. I have always kept my membership there because of what the church meant to me all those years.”

Wright’s latest project, Breathing Fire Like Dragons, debuted at #22 on the iTunes Christian & Gospel Chart on September 13, 2019. The single “Grace Pockets” reached #1 on the Effect Radio Network Top 20 for the weeks of June 19, June 26, July 4, and July 11, 2020 and #22 on the Top 30 Christian Alternative Chart. The single “Blindspot”, reached #4 on the Crossroads Top 30 Songs of 2019 and #17 on the Top 30 Christian Alternative Chart. Wright was also Artist of the Month on the Effect Radio Network in February 2020. The single “Birds N Butterflies was released on June 19, 2020 with the official lyric video.

For more background on Wright’s music, please read below…

In 2003, Wright was the grand-prize winning songwriter at Embassy Music’s Ultimate Talent Search in Nashville, Tennessee for the song “John, Jane, and All Things” from his first album, Something Much Higher, produced by Mitch Waddell of Majesty Productions. The song later appeared with the song “Just Another Day” on a bonus CD in Radio & Records Magazine. “The theme of Something Much Higher is that there is always a bigger picture than what we can see. Life can be pretty rough, especially loss through death or unwanted change. A lot of the songs on the album are about the gifts that appear from the darkest times.” But the album is not heavy and dark. “It’s really a celebration.” The album was engineered by Dove Award-nominated producer Mitch Waddell of Majesty Productions.

One of the most interesting songs on the album has the unlikely title of “Roadkill”. “I wrote a letter one time and said ‘I felt like roadkill today.’ I was thinking that roadkill is the only thing I know of that, even after it’s dead, is still being devoured. I think we have all had times when we feel there is nothing left to give—those ‘getting blood from a turnip’ times. That’s when God is saying, ‘I am your strength. I love you more than anything’.” The bonus-CD radio single “The Words to Say” has become one of Wright’s signature songs, and is a classic to listeners of his music.

Wright’s second project, Leap, was completed in 2011 and was produced by by Brandon “Swaff” Swafford (Family Force 5, Decemberadio, After Edmund, 7eventh Time Down,Third Day, JJ Weeks Band). “Working with Swaff has been one of the best experiences I have ever had in music.” When asked how Leap compares to Something Much Higher, Wright explains: “Most of the songs on Something Much Higher were written during periods of loss and trying to make sense of what was happening through God’s perspective. Leap was inspired by the passage in the Song of Solomon where a girl sees her guy leaping on mountains because of the love they share. Wright explains, “If a person’s love can cause somebody to leap, what does knowing that the Creator of the Universe loves us more than anything make us want to do? God shows us love and blesses us with gifts every second we breathe. So Leap is about moving into that awareness and living it.”

Other differences between the albums are in the style. “Leap is a little more of a rock album as a result of working with Swaff. He put his all into making this a great album, so I give him credit for everything that sounds good.” One common characteristic of both albums is that they are based on Christ’s teachings. “To me, that’s what this journey is all about.”

Wright received top honors at the 10th Annual Independent Music Awards for the song “Glorious Savior” (written by Swaff, Carson Ray, and Wright) from Leap. The song was also one of the three top winners in the International Songwriting Competition. The first songs from Leap, “Glorious Savior” and “Straight N Narrow”, were added to radio station playlists beginning in the fall of 2011.

Wright performed at the IMA Live! Showcase at The Living Room in New York City in December, which kicked off the winter radio promotions of the single “Little Child” and the single and video for “Abby May”, both from Leap. “’Little Child’ is inspired by Matthew 19:14, where the people were trying to keep the children away from Jesus. He told them to let them come to Him, ‘for such is the kingdom of God’. Childlike faith is the key, and the song deals with realizing it has been stolen and wanting to find it again. The video for ‘Abby May’ deals with a girl who has become merchandise for human traffickers. For reasons she does not understand, she becomes drawn to a church and wonders what would happen if goes inside. The song and video address the church and how it is perceived by people like Abby May who feel like outsiders.” Over 500 stations and networks worldwide added songs from Leap to their playlists.

Wright’s third project, HOLE IN THE SKY, debuted at #18 on the iTunes New Christian Releases Chart its first week. The album was produced also produced by Swaff in The Delivery Room in Villa Rica, Georgia. The theme of the album was inspired by I Corinthians 2:9 that says, ” Eye hath not seen, nor ear heard, neither have entered into our hearts the things that God has prepared for them who love him.” As Wright says, “If we could get a glimpse of what is going on behind the scenes and from God’s perspective, we would never worry.”

The first single from HOLE IN THE SKY, “Mama’s Faith”, was written by Wright, Swaff, and Joshua Harrison. “Mama’s Faith” is about Wright’s mother, Kitty Wright, and is even more special because she is a featured singer on the song. The song was on the Christian Music Weekly Country Chart for 19 weeks and reached #3, and hit #1 on the Christian Radio Chart.

The second single, “Typical Day in Heaven”, was written by Wright & Swaff. It was the #1 song of 2016 on Crossroads Top 30 Christian Rock Songs of the Year and was on the Most Added Christian Rock list for Billboard’s National Airplay Chart for the March 5 edition. It was also featured as one of 50 songs on Apple Music’s Christian & Gospel Found Sounds and one of 25 to make the Apple Music Breaking Christian Playlist.

The third single,”No Go”, made the Most Added Christian Rock chart twice for Billboard’s National Airplay Chart (July 23 and January 17).