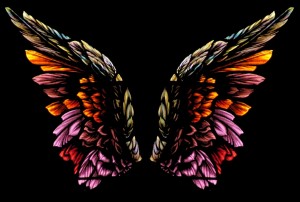 This is a continuation of a series of entries describing those times in my life when I have felt the presence of God in a powerful way, and when I knew, without a doubt, there is a God…

There have been several times when God revealed His presence to me while I was going through the experience of losing someone through death.  My first experience with this was the death of my dad.  I had been taking care of him while he recovered from heart surgery.  His prognosis was good, so it never occurred to me that he would die when he did.  In retrospect, there were so many signs that God was getting him ready to go to the other side.

For example, when he was recovering in the hospital after surgery, Dad was telling me that his father and best friend had visited with him.  Since I knew both of them had passed away many years ago, I thought maybe Dad was going to say that it was a dream.  But he kept telling me about their visit.  Probably 20 minutes later, Dad said “They died a long time ago, didn’t they?”  I told him they had, but reassured him that I had enjoyed hearing about the visit.  He laughed and said the doctors must have him on some pretty strong painkillers.

The night Dad died, our devotional was about I Corinthians 13.  We talked about the verse that says “for now we see through a glass darkly, but then face to face.”  I remember telling him that I did not realize this verse was part of the love chapter in the Bible.  We talked about whether or not we would all recognize each other in heaven (I shared some of this in an earlier entry).

Also, earlier that night, Dad had spent some time with an estranged loved one, and it was a great experience for both of them.  Because of this, he talked to me about many of the people and events in his life, some that seemed difficult at the time, and how he saw them now that the years had passed.  It gave both of us the opportunity to say what we normally would not have said.

Later that night, I woke up and heard Dad calling my name.  He was holding his chest and said he felt cold.  I called 911 and the nurse who lived next door.  She was there in less than a minute.  I remember her saying his pulse was fine—that nothing seemed to be wrong.  And just like that, Dad began gazing upward and left this earth.  I was telling him to hold on, but he was already gone.

The ambulance took him to the hospital, and everyone gathered to hear an outcome we already knew.  Arrangements were made, and many hours passed until it was morning.  My mom was with me when we returned to Dad’s place, and I remember uncontrollably wailing in grief as I walked into the house where, just hours ago, we were together and laughing.

As I entered the room where he had died, my eyes were 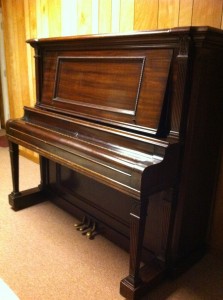 immediately directed to Dad’s piano.  Right in the center of it was the sheet music for a song called “He’s Alive”.  I had bought the sheet music years ago and had not seen it since high school.  But there it was, right in the middle of Dad’s piano. I knew that God was telling me that Dad is alive on the other side and that all is well.  I don’t know how to describe it, but this one heavenly message completely changed the way I dealt with losing my dad.  An excerpt from “He’s Alive” may explain it best:

One thought on “Part 4: The Angel at Coach Wright’s Piano”